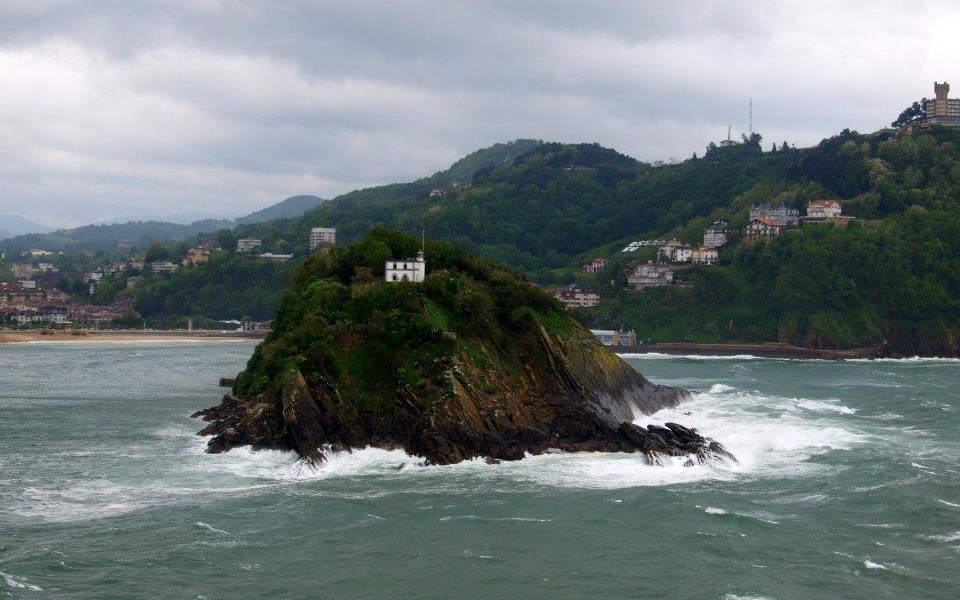 We can always come up with an excuse to visit San Sebastián. From our first babymoon to finding ourselves within four hours driving distance on the French side of the border, we let our stomachs guide us here.

First and foremost, San Sebastián is a foodie destination. With a hyper creative pintxos (think canapes) culture and the second highest number of Michelin stars per square metre in the world (Kyoto is #1), you come to eat well. Basque chefs have created a new culinary genre, small plates made with extremely modern cooking techniques, which has garnered worldwide respect. Instead of competing with traditional Basque cuisine, the dialogue between revolution and tradition has made life better for all of us eaters.

As for the other draws, San Sebastián is tucked on the Bay of Biscay in Spanish Basque territory, 20 kilometres from the French border. You get gorgeous beaches, surfing, fascinating cultural heritage, and France access to boot.

It’s a small, walkable city, which make it an easy win. Locals are laid back and friendly, especially if you make some effort to attempt Euskera, the Basque language. It’s also a family place. You’ll see multi-generational families out to eat, drink, and promenade.

Most people overlook San Sebastián for family travel. It is, however, a fantastic family travel destination in Europe.

As a beach town, summers here are deliciously hot and the beaches are packed. Like many other popular spots in Europe, spring and fall in Sebastián make for beautiful, more tranquil travels. Avoid December and January when daily rains and a howling gales make outdoor exploration near impossible.

Check out the flight deals on Expedia.com

to see when it’s cheapest to fly. We happily offer our family travel wisdom for free. You enable us to keep this website going when you book flights through our links to our affiliates like Expedia. Where to set up family base camp: Parte Vieja/Old Town 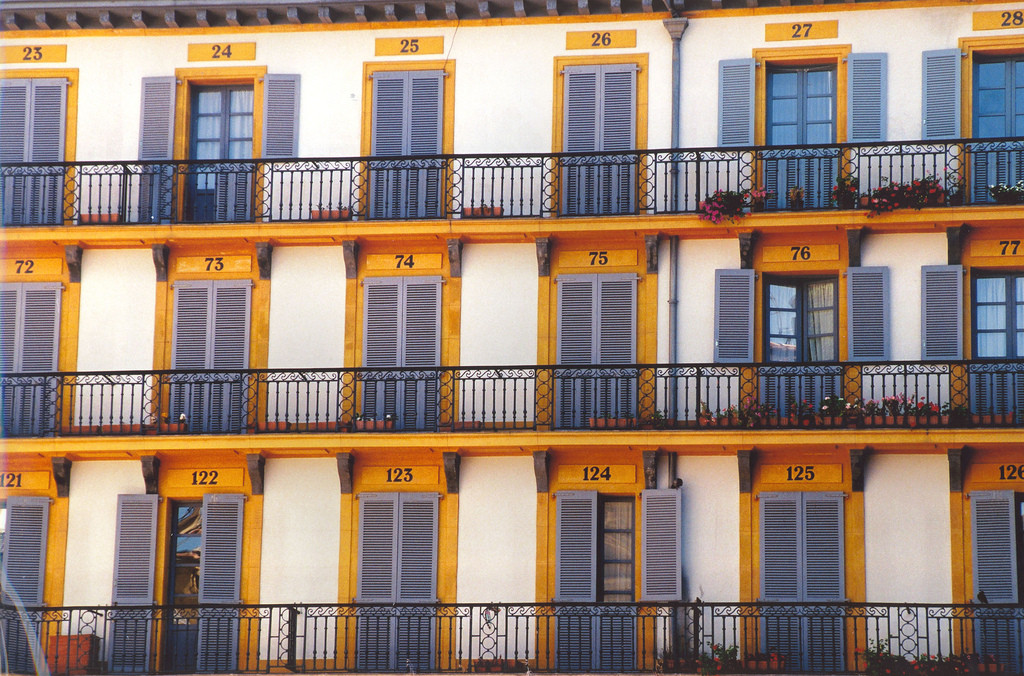 We stay in Parte Vieja – Old Town – because it’s where you’ll find the highest concentration of pintxos bars and restaurants. The pedestrian only streets make it easy and pleasant for small folk to walk safely and explore. When you perch on a patio for a drink and a snack, your kids can mingle with the dozens of other youngsters, scootering, chasing pigeons, jumping rope and generally having a good time, in between bites of croquetas.

The old town is situated between the port and the Urumea River with Mount Urgull, It’s the also the best place to live if you plan to visit San Sebastián’s Aquarium. It’s a 10 minute walk max from any part of the old town. San Sebastian’s gorgeous Belle Epoque carousel is also located within 5-10 minutes walking distance of old town in the Alderdi Eder gardens.

Accomodation: We partner with travel companies that we use for our family trips. You can find reasonable apartment rentals in the Parte Vieja ‘hood via Airbnb, and by booking through our family link you’ll get a travel credit. There are  more options via Booking.com‘s San Sebastian hotel, apartment and house rentals. 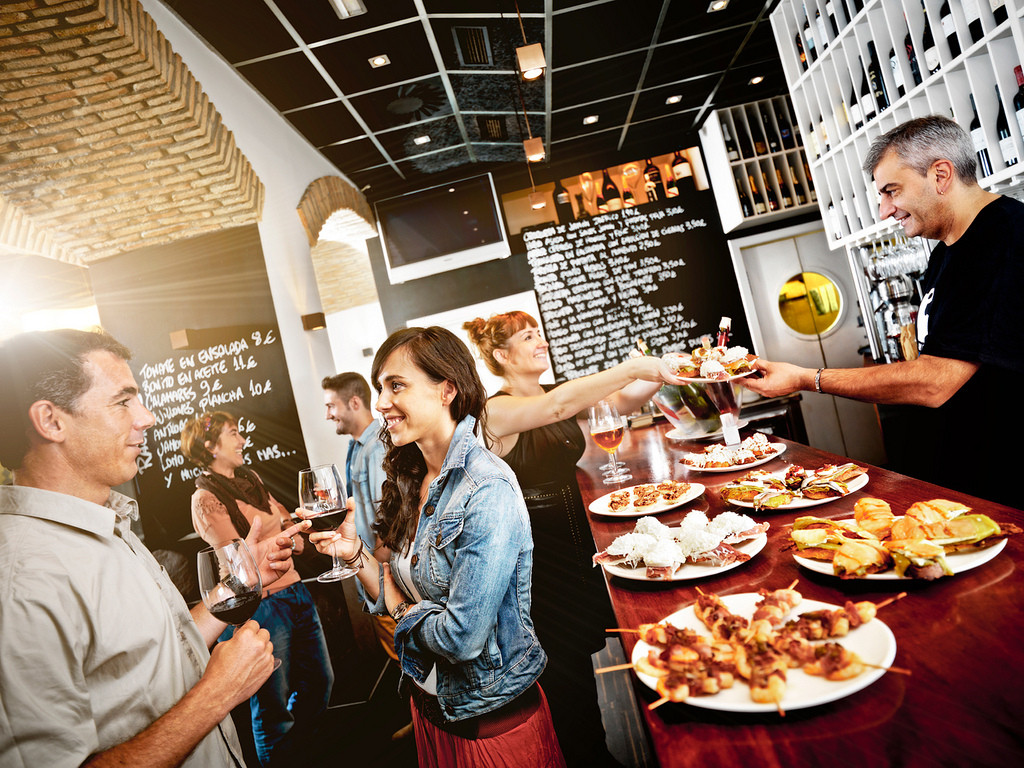 Say it with us: “pincho!” Okay, you’ve got it. Pintxos were originally slices of baguette piled with food of any kind. A toothpick, or ‘pintxo’ was used, to hold it all in place. They were laid out on bars and you’d pick them up and eat them by hand, no plate.

The traditional iteration has evolved into one or two bite wonders of inspired genius often made-to-order hot and served on plates with forks. Some are classic cuisine, some are smoke-and-mirror theatre presentations of molecular gastronomy.

Whichever version you order, you’re getting the amuse bouche of Basque cuisine. There’s no need to drag the kids to a Michelin restaurant in San Sebastian to experience stellar regional cuisine. And as with all things miniature, complicated and sensory-intense, kids love pintxos.

The Basque pair pintxos with a drink such as half a beer or a glass of local fizzy wine txakoli before there lunch and dinner. Since lunch is at 2:30pm and dinner is around 10pm, the best times to go are 1pm and just after 8pm.

It’s kinda scary to walk into a pintxos bar the first time. Spy on locals. Basically you pick up cold items from the bar, order the hot items from the bartender, and you pay at the end. Prices range from 2 to 8 euros. Technically, you should not consume many in one spot. Etiquette calls for having two max in one spot and then bar hopping. In this instance however, given the flights you’ve endured with ankle biters, restraint is overrated. Now go forth and eat well.

Warm up your pintxos ordering skills at the handful of restaurants in La Consti as the locals call it, before heading for the more intimidating pintxos bars in the narrow alleys of the old town. La Consti is a spacious and beautiful square in the heart of the old town bordered by happy yellow buildings. It was once a bull ring, but these days patio tables, pigeons and kids fill in for battling bovines. La Consti has many pintxo bars, the favourite of which is Bar Astelehena which has modern pintxos on offer. Nearby Ganbara is your more classic choice. 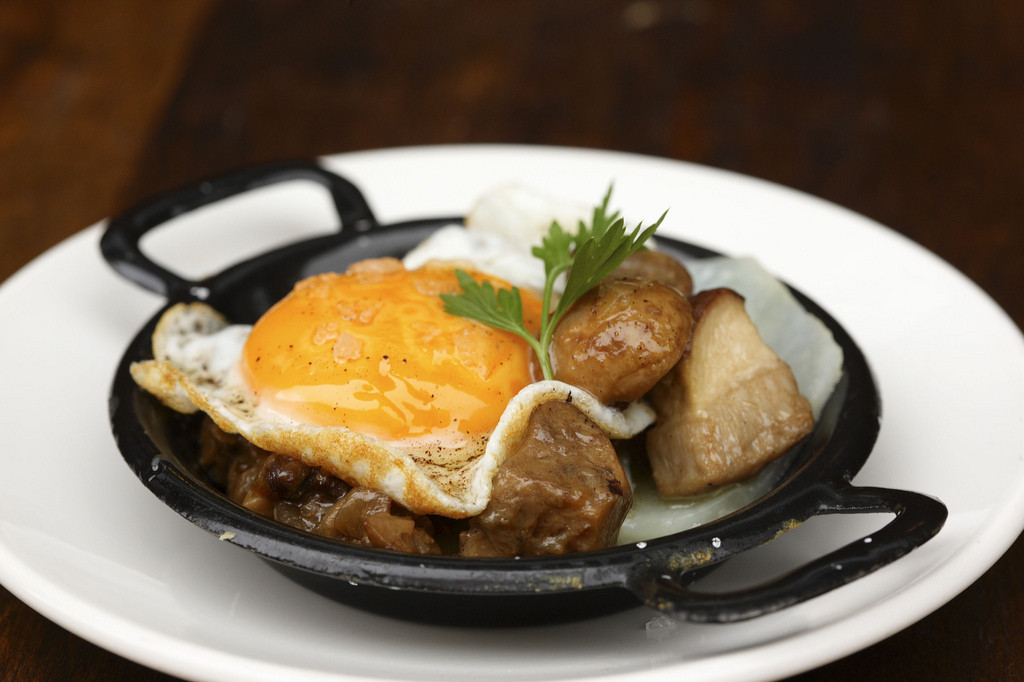 Astelehena bridges the gap between traditional Basque cuisine and new school show offs. The presentation is modern; the inputs are regional classics. Beef cheeks served as cylinders, goat cheese risotto, white tuna tacos, grilled squid, tiny sirloin with quail egg and caramelized onion. Everything from the hot menu is impeccable. Hold back, you have a few more stops. 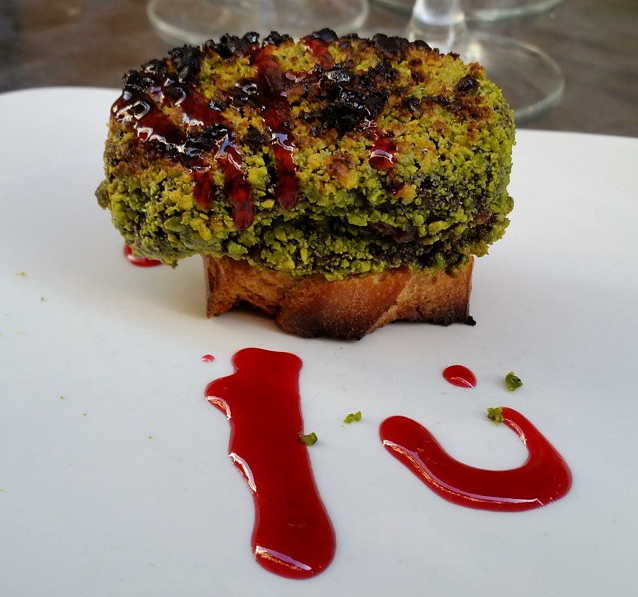 One of the cool kids of the molecular gastronomy pintxos scene, Bar Zeruko is always packed. We’ve never managed to snag a tiny table inside with the kids. It’s probably a bad idea anyway. Instead, park the stroller outside and stand while one parent sources deliciousness.

Examples include pistachio-encrusted blood sausage, lobster roll with aioli, stuffed sea urchins, wild mushrooms with foie gras mousse, and cod cooked over its own tiny fire. Flavours are fascinating. Presentation is exciting. Even when their showmanship overreaches, we appreciate the effort.
Calle Pescaderia 10, + 34 943 423451, barzeruko.com 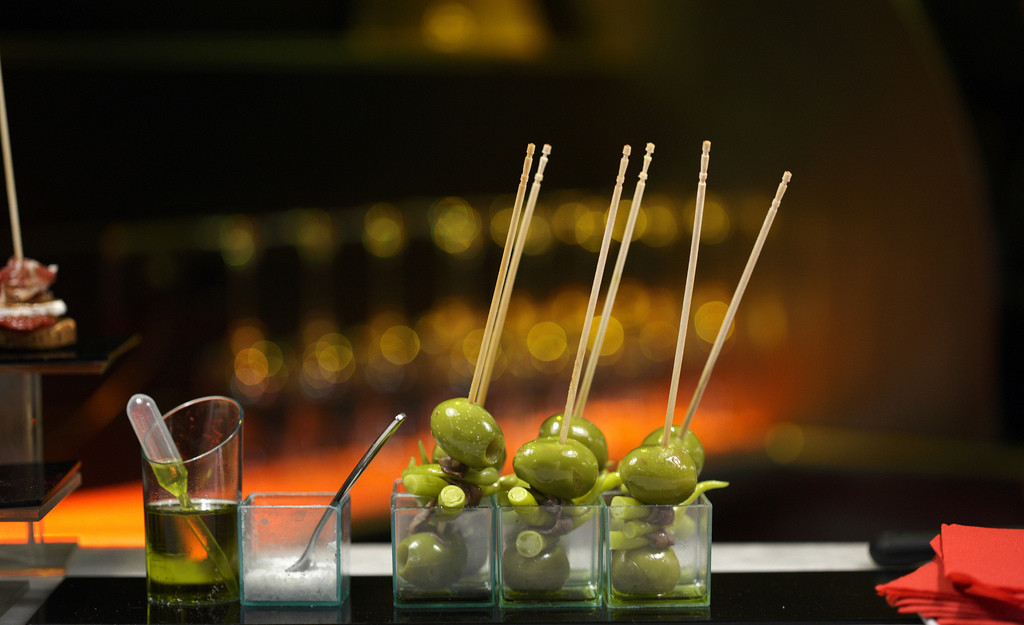 This is the most fun experimental pintxos bar in San Sebastian pintxos scene. Black as a bat cave within and always buzzing with an international set of young look-at-me’s, no one will notice your tiny people whether or not they behave.

Start with the little black dress of Basque pintxos – the gilda. It’s a fat green olive, pickled guindilla pepper and Cantabrian anchovy on a stick. Then go nuts. Must orders: the makobe (a kobe beef slider with a ketchup infused bun and crispy banana txips), and the rabas (black squid ink mini donuts). Most fun presentation goes to the shake your own duck salad served in a hamster ball.

Your biggest problem here will be your small folk’s sharing skills, they’re going to want it all.
Calle 31 de Agosto 31, afuegonegro.com 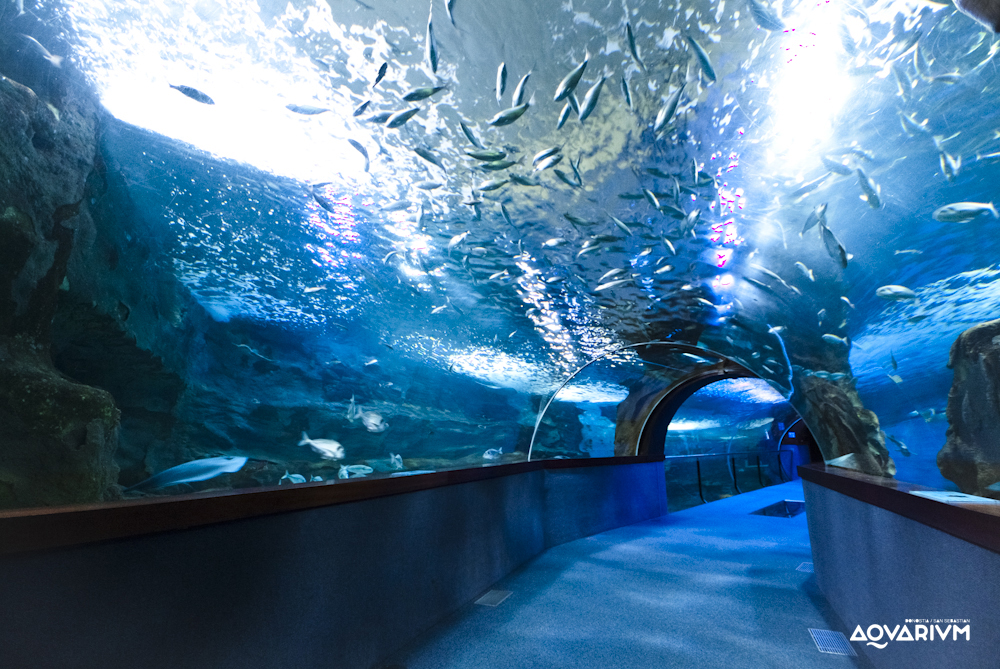 Port towns are good at aquariums. Perched on the picturesque harbor, the San Sebastian Aquarium  is over 100 years old, but doesn’t look it. It underwent massive renovations in 2008. The coolest exhibit is the acrylic tunnel suspended in the water, where manta rays and sharks swim by your face. On Tuesdays, Thursdays and Saturdays at 12:00 you can gawp as divers feed bull sharks.

You also get to discover more about the Basque’s special relationship with the ocean. Some say they sailed to the new world long before Columbus on whaling and cod fishing expeditions. There are two floors dedicated to the maritime endeavors of the Gipuzkoa. 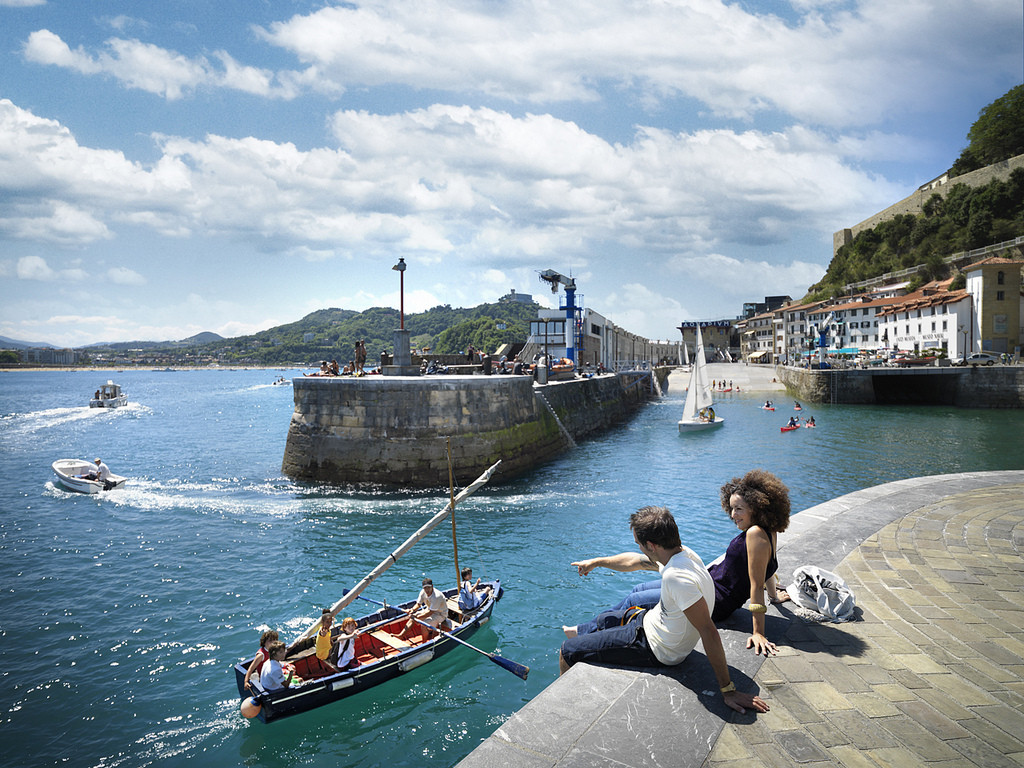 Take the family for a stroll along the Paseo Nuevo (built 1916) which skirts  Monte Urgull from the Aquarium at the harbour to the Calle Salamanca.

It has breathtaing views of the Bay of Biscay and the coast of Gipuzkoa, and small folk enjoy the breaking waves. You may even get a good splash. Once your worn out, make your way toward for pintxos. 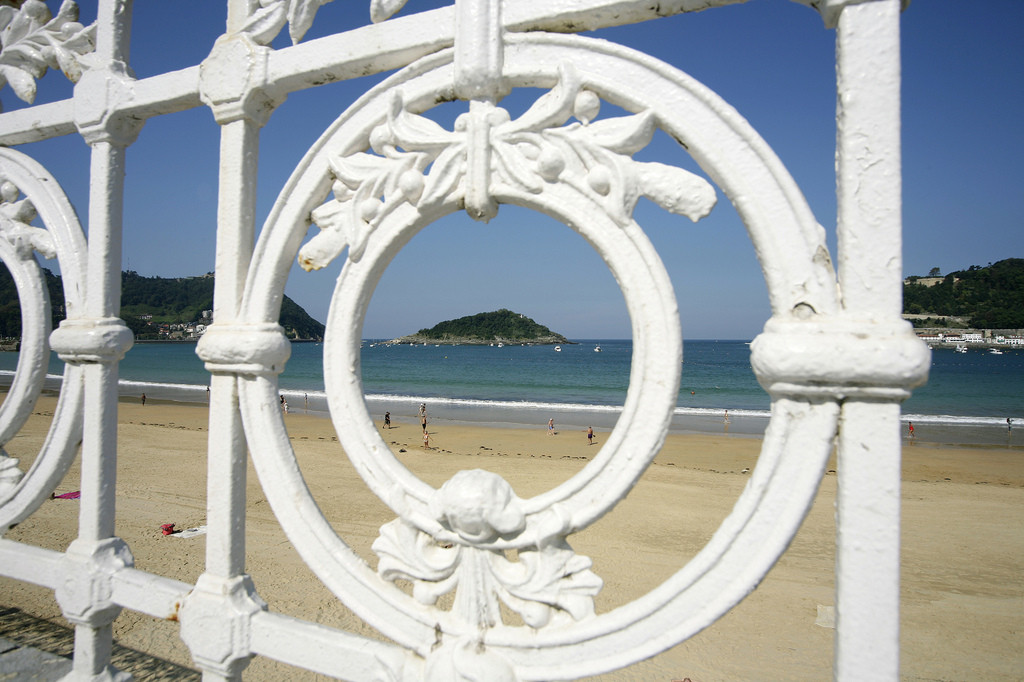 This is your classic choice. Golden sand. Perfect aqua bay. Emerald green Isla Santa Clara perched temptingly in the forefront. The stately Concha Promenade with all it’s glorious architecture, ice cream vendors and people watching is just behind you. You can’t go wrong here. Travel and Leisure ranked it the second best city beach in the world. It’s ideal for a sunset stroll. But it’s not our #1 pick for family beaches. For that we say Isla Santa Clara. 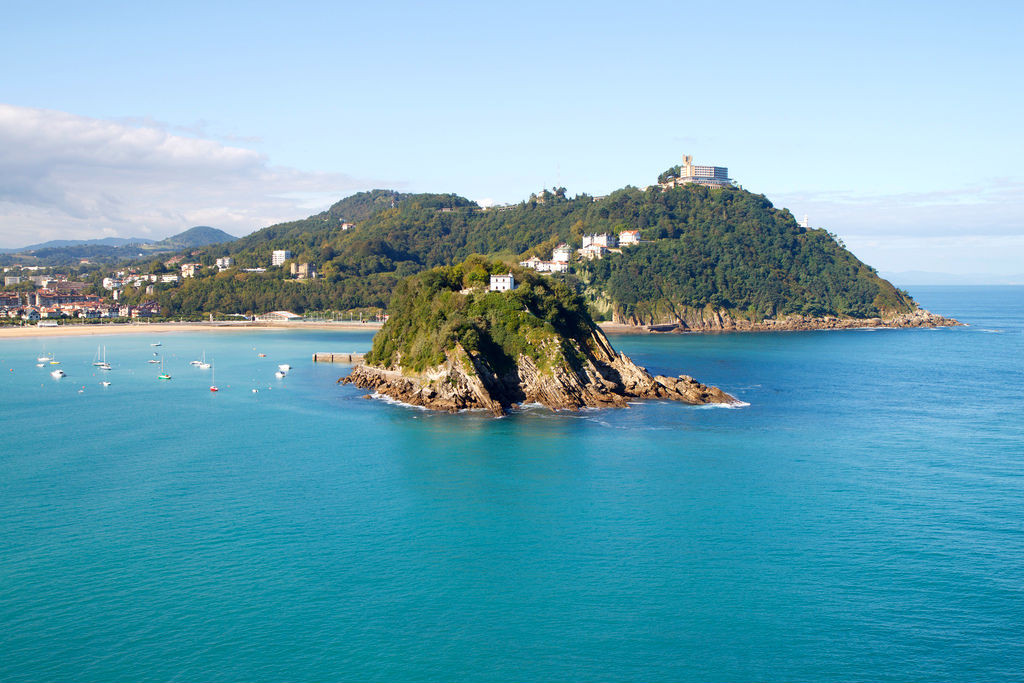 Local mamas and papas head to Isla Santa Clara with their small folk in summertime. The 30-metre beach is ideal for wading, exploring, and of course making new friends. It’s only accessible at low tide. There is a lifeguard.

From June 1 to September 30, a boat runs every thirty minutes from the harbour to the island. Some of the boats are glass bottomed, so for a small additional fee you can get a marine life tour too. 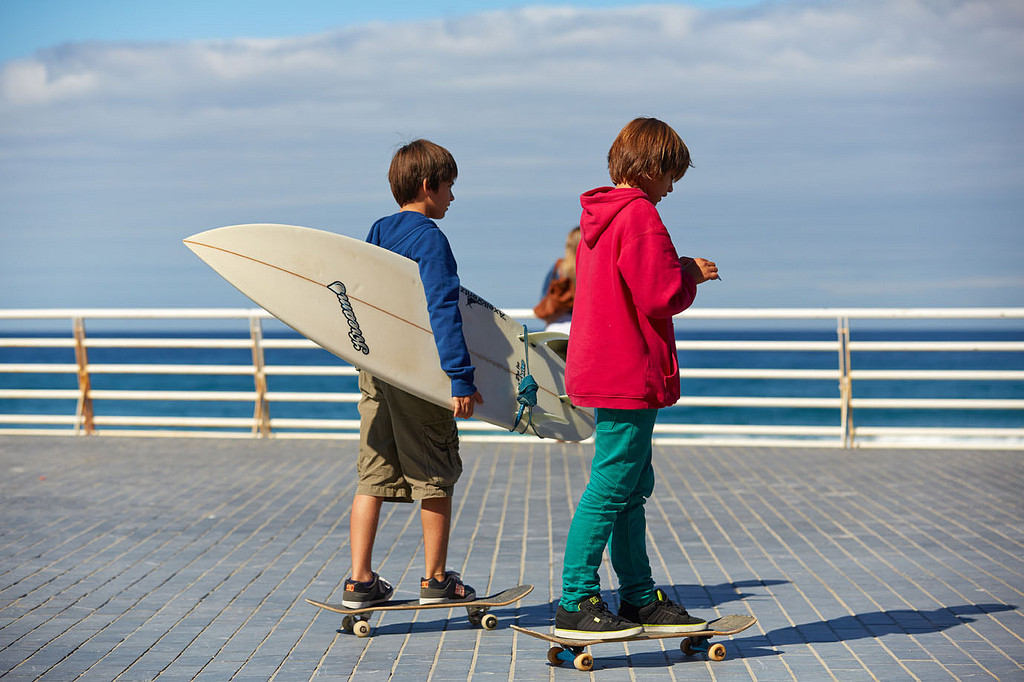 If you want to learn to surf, this is your beach. Head to the Gros district east of old town. Book a surf lesson with a school such as Puka, Spain’s oldest surf school. Discover the local passion other than food. 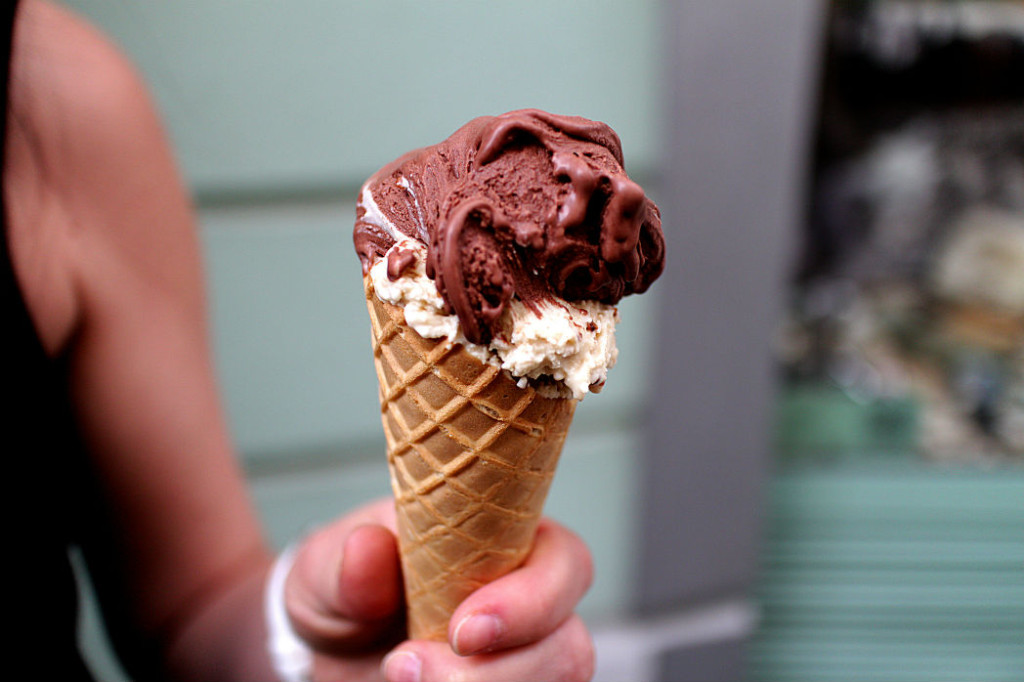 Banana split, milk chocolate, lemon, cinnamon, Kinder… we’ve almost tried them all. Creamy and intensely flavorful, whatever you order, you will not suffer from Breyer’s remorse at this outlet in Gros.

For a more exciting, gastronomic ice cream in San Sebastian experience, on par with the pintxos scene, check out Oiartzun. Pure-cream ice cream, green apple sorbet, whiskey and Basque cheese are jut some of the interesting flavours on offer. It’s located in the Old Town near the water. 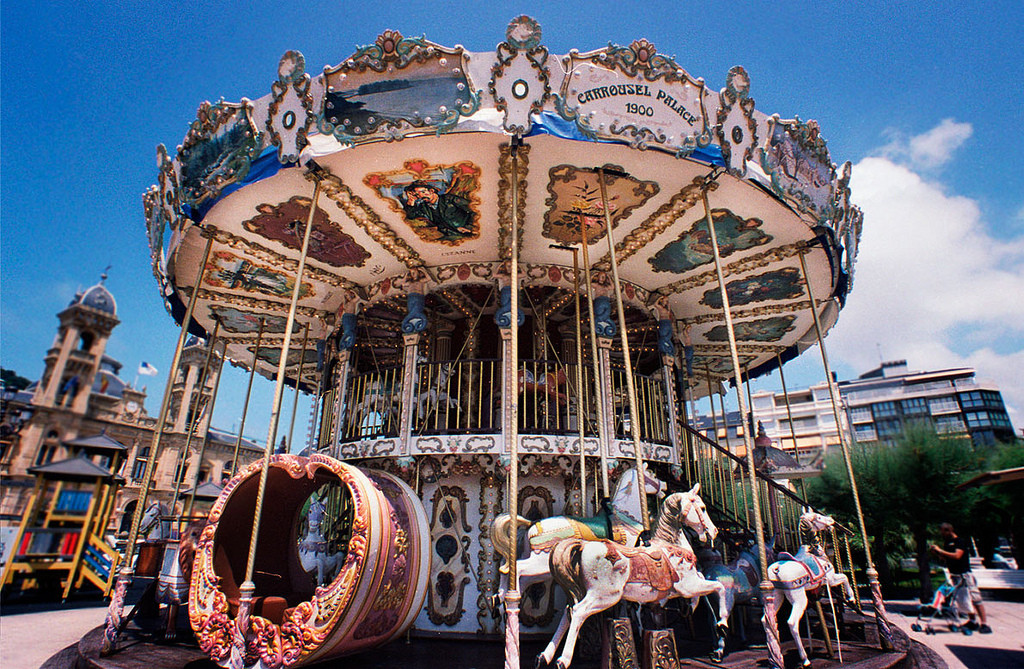 Do this every day. At least once. It’s a gorgeous Belle Epoque carousel on the Playa de la Concha oceanfront near the boardwalk in the park called Alderdi Eder. You’ll find tons of three-generation Donosti families doing the same. The palm-tree lined space also has a playground to help parents avoid the usual mood plummet when you run out of carousel tickets.

Genuinely beloved by Stockholmers, Djurgården is a beautiful island park stuck in the middle of Stockholm between Gamla Stan, Södermalm and Östermalm. The island takes many forms ...